Carl Wilhelm Müller enrolled in the Dresden Academy in 1854 and was a pupil in Ludwig Richter’s studio from 1858 to 1864. In 1865 he travelled to Italy by way of Munich and Salzburg. He arrived in Rome in 1866 and stayed in Olevano in the late summer and early fall of that year. From September to October he shared lodgings in the Casa Baldi there together with Victor Paul Mohn (1842–1911) and Albert Venus (1842–1871). All three were pupils of Richter and all of them must have been aware that their teacher had stayed in the same place in September 1824. 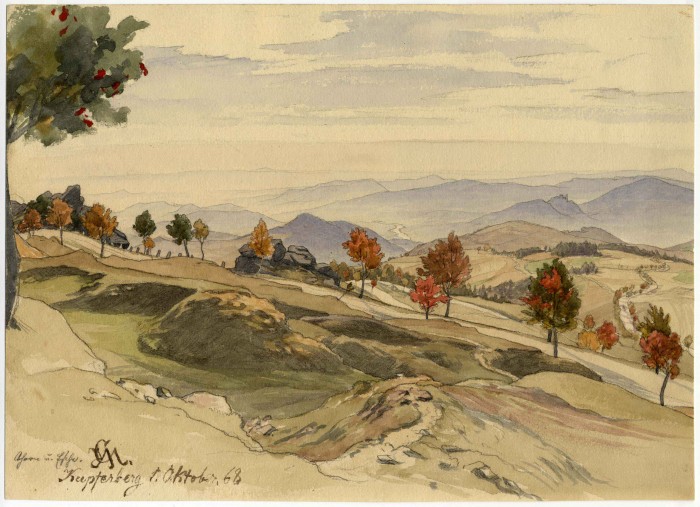 Autumn Landscape in the Erzgebirge 1868

signed in pen and ink with monogram and annotated at lower left Kupferberg 1. Oktober. 68

Unlike many other artists who would mine their Italian sketches in landscape paintings for many years, Müller painted only very few Italian motifs after his return to Dresden in December 1866. Still following his teacher’s blandishments to draw from nature, Müller concentrated instead on views of the landscapes of his native Saxony and Bohemia.

This charming view through a loose row of red-leafed trees in autumn was made near Kupferberg (Měděnec) overlooking the Eger Graben (Oherský příkop) in the Erzgebirge (Krušné hory) in Bohemia, today part of the Czech Republic.