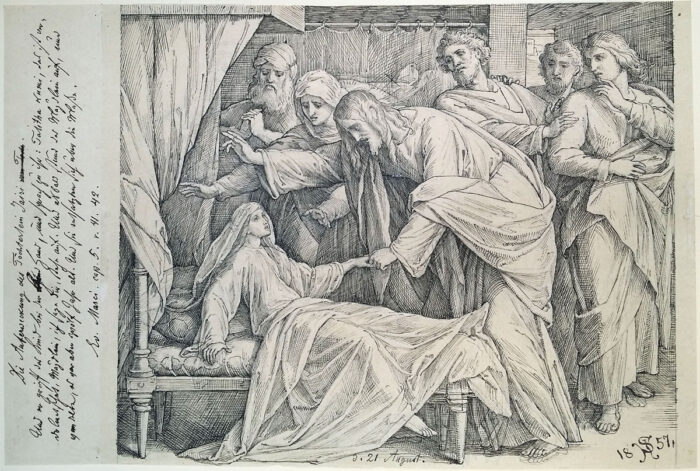 monogrammed JSC and dated August 21, 1857; the Bible passage illustrated by the drawing is written out by the artist in pen and ink on the left margin of the sheet

Preliminary drawing for plate 184, published as part of the 24th installment of the Bibel in Bildern in June of 1860. Schnorr mentions this drawing in his diary on August 21, 1857.

The raising of the daughter of Jairus (Mark 5:35–43) is one of the more obscure biblical passages. Jairus was an archisynagogus (the head or leader of a synagogue) in Galilee. His daughter had fallen very ill and the father asked Jesus for help. When he arrived, the girl had already died and was surrounded by her crying relatives. Jesus spoke to them: “Why all this commotion and wailing. The child is not dead but asleep.” Everyone present was shocked and mocked Jesus, admonishing him to show more respect. Jesus then took the hand of the dead girl and said in Aramaic: “Talitha koum!” (Girl, I tell you, stand up!). Immediately, Jairus’s daughter woke up and Jesus told the relatives to feed her.

On the (Pre-)History of the Bibel in Bildern:

The illustration of the Bible was one of the eminent tasks the Nazarene artists had set themselves. While they are usually seen as a Catholic movement, a pietistic Protestantism played a significant role in their intensive study of the Bible and hence also for such a comprehensive project as an illustrated Bible.

Its origins predate even the forming of the Lukasbund (Brotherhood of St. Luke) in Vienna in 1809. The year before, Johann Friedrich Overbeck was commissioned to make drawings for engravings meant to be used in a school Bible. This never came to pass but Overbeck continued to make plans for it after he went to Rome in 1810. Schnorr joined the German artists in Rome eight years later at the beginning of 1818. By then, the Bible illustrations had become a collaborative project with the engraver Carl Barth as its driving force. Schnorr created his first Bible drawings in 1820. A next step was initiated by the Stuttgart publisher Cotta in 1821, this time for a Bible illustrated with engravings after works by earlier masters as well as by the contemporary German artists in Rome. This project was also aborted. Starting in March of 1824, a small group of artists began to meet once a month in a Komponierverein (association for composition) to discuss drawings everyone had prepared on a given subject. Around that time Schnorr began work on a drawings cycle illustrating the Old Testament. He was inspired by the subjects set by this association but soon added drawing illustrating themes of his own choosing. He made a detailed list of the scenes and started a scrapbook in which he assembled all these drawings in the order of the biblical text. From that point onward, all of Schnorr’s Bible drawings are uniformly executed in pen and ink and adhere to a more or less identical format. When he returned to Munich in 1827, he hired the engraver Carl Hoff to make a first set of five etchings based on those drawings. However, Hoff’s slow work pace and Schnorr’s dislike of the way the printmaker translated his drawings into print, led to a quick abandonment of this undertaking. A last effort for a group project was made in 1828 when most of the artist from the Nazarene circle came together in Nuremberg to celebrate the 300-year anniversary of Albrecht Dürer’s death. Appropriately, Dürer’s work was supposed to be the inspiration but this project, too, came to no fruition.

In 1834 Schnorr was introduced to the Prussian Crown Prince, the later King Friedrich Wilhelm IV, through Carl Josias von Bunsen, a diplomat friend from the Roman years who was a close adviser to the prince. Schnorr was allowed to present his album of Bible drawings but now it was the artist himself who held back. He felt unsatisfied with many of his earlier designs. His extensive work on the frescos depicting the Nibelungen Saga for the royal Bavarian residence in Munich had led to a significant change in his style. His figures had become more monumental, he aimed for stronger contrasts and for a clearer narrative style. Consequently, he began to rework many of his original Bible designs.

In 1843 it was again Cotta in Stuttgart who came up with the proposal for an illustrated Bible, this time around, however, by using the relatively new technique of wood engraving. Schnorr contributed 42 designs, the others were by his pupils Gustav Jäger and August Strähuber. Published from 1846 to 1850, this was still not the “pure” image Bible envisioned by Schnorr but it gave him a first opportunity to practice designing for wood engraving.

In the summer of 1851 Schnorr visited his friend Bunsen in London. There he presented his Bible drawings to the London publisher Longman, a great champion of wood engraving. Longman suggested that upon his return to Germany Schnorr have a trial wood engraving made after one of his designs. To this purpose Schnorr got in touch with the publisher Georg Wigand in Leipzig. The print was made by the woodcut studio of August Gaber and Hugo Bürkner. Wigand was so impressed that he took the project on, despite the fact that Longman had in the meantime withdrawn his participation. So, at long last, the production of the Bibel in Bildern was on its way.

As he had done already when working on the Bible’s published by Cotta in 1843, Schnorr drew all the final designs directly on the blocks. As a result, most of the preliminary drawings survive. Wigand published the work in thirty installments, each containing eight plates, between October 1852 and December 1860. It could be acquired in a Volksausgabe (popular edition), Prachtausgabe (deluxe edition) on regular paper, and in a deluxe edition on chine paper. Schnorr contributed a preface for the first issue which would later also serve in slightly modified form as the preface for the bound edition of all 240 plates that became available upon the completion of the project by the end of 1860. The installments were accompanied by explanations written by the Leipzig theologian Bruno Lindner. The bound editions had new explanations Heinrich Merz, a theologian from Schwäbisch Hall. Wigand also published a polyglot edition with captions in 14 languages which assured a reception of the work abroad, notably in France and England. There were separate editions of only the psalm illustrations, a school Bible with a selection of 100 images that excluded those deemed as too offensive, and broadsheets with enlarged images to be hung on classroom walls. With the expiration of the copyright in 1903, complete as well as partial reprints proliferated even more, with new reproduction techniques making even editions in color possible. By now, Schnorr’s imagery had reached a wide public and therefore truly fulfilled the original Nazarene ideal of a widespread religious education and knowledge of the Bible. The cost, however, was a soulless industrial mass production that showed, at best, only faint remnants of the inherent artistic quality of the original drawings.