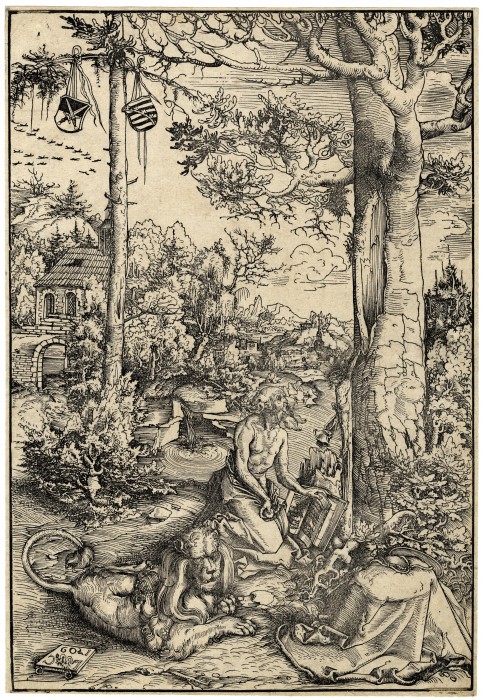 Der heilige Hieronymus büßend in der Landschaft – The Penance of St. Jerome in the Wilderness 1509

An early and sharp but somewhat lightly printed impression; in good condition with narrow margins all round; the gaps in the borderline at upper left and below filled in with pen and ink.

“In this woodcut Saint Jerome’s wilderness is an idyllic German image of nature both mysterious and generous, like the Christianity to which the saint devoted his life” (Charles Talbot in cat. Detroit, p. 224, no. 121). The lion, the saint’s faithful companion, is set prominently in the foreground and betrays the artist’s awareness of Dürer’s engraving of 1498 (Bartsch 61), yet Cranach’s landscape differs notably in several respects. The rocky and barren landscape behind Dürer’s Jerome has been replaced here by a fertile, somewhat lush and loosely wooded scenery with a spring splashing into a pool. The composition is punctuated by trees whose branches appear to extend beyond the picture frame and expands brightly into the far distance where the view of a town can just be made out. Cranach conceived the space within this wide landscape in a far more logical manner than he had done in some of his earlier works—most likely, as Guido Messling suggested, reflecting the artistic impact of his trip to the Netherlands the year before (cat. Brussels, pp. 135f., no. 54). Thus the saint is now no longer positioned before the landscape but embedded within it. “Cranach took measures to draw the beholder into the landscape, not only by the compelling vista that angles from the near left to the mountainous horizon, but also by the foreshortening of tree branches, suggesting that a canopy of foliage extends overhead toward the viewer. Just how mindful the artist was of such two-way visual movement can be seen in the lower left corner, where the lion confronts the beholder face-to-face and the tablet with the signature and date has been turned around as if for reading from within the picture” (Talbot, ibid.). Despite the gaps in the borderline, this impression belongs to the gaps in the borderline, this impression belongs to the first printing. It was only reissued once more and not before the 1620s when the block was already in the possession of the Augsburg art dealer and publisher Johann Klocker. As in the case of all prints by Cranach, early impressions like this one, contemporary to the creation of the blocks, are very rare.