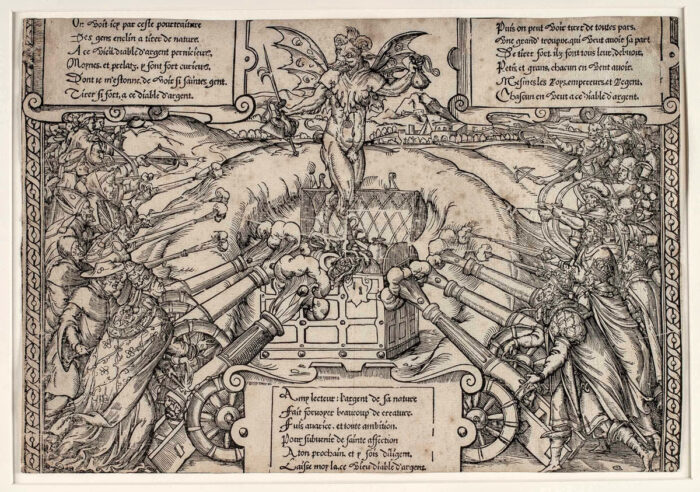 In the center of the composition stands the Money Devil in a treasure chest, surrounded by religious and institutional dignitaries who shoot at him with cannons, muskets, and arrows. This allegory was a popular subject of French vernacular culture. Its earliest representations can be found in the woodcuts that originated in Paris’ rue Montorgeuil.

Stylistically, this anonymous woodcut belongs to the popular woodcuts that were produced during the second half of the sixteenth century in rue Montorgueil in Paris. The opposite of precious artworks treasured by the sophisticated collector, these prints were meant as images populaires, not unsimilar to the mass-produced German woodcut broadsides of the same period, and like these, they survive in only very small numbers.

It is not surprising, therefore, to find that no other impression of this woodcut is documented. However, the Rijksprentenkabinet in Amsterdam owns a hand-colored broadsheet that shares the same subject matter (RP-P-1950-412) but illustrates it in a much more simplified way. The text in now set in letterpress and the print is in all likelihood later. Its publisher is Jacques Boussy (1533–before 1587) whose father, Jean the Elder (d. 1547), was among the first to settle in rue Montorgueil. The question remains who published our print. A woodcut with a similar composition survives in the Bibliothèque nationale (Lepape 277). Instead of the Devil it shows the figure of Death at its center but uses a similar border decoration. Since it bears the address of Germain Hoyau (active 1553–1583) and Mathurin Nicolas (d. 1581), our woodcut might therefore have been published by them as well, or perhaps even by the earlier partnership Hoyau had formed with Germain Truschet (active 1551–1558, d. before 1564) when they collaborated on a celebrated map of Paris in 1553. In either case, our woodcut probably predates the one in Amsterdam and can therefore be counted as the earliest depiction of a subject that captured the French imagination well into the nineteenth century, when versions of it were still issued in the willfully naïve woodcuts known as Épinal prints.