Pierre le jeune was the son of the elder Pierre Biard (1559–1609) from whom he also received his first artistic training as sculptor. In 1609 he was appointed sculpteur ordinaire du roi, from 1612 he was allowed to bear the title Valet chambre du Roi. His sister Barbe married the architect Sébastien Bruant. Their sons Jacques and Libéral became two of the most prominent representatives of French Classicism and founding members of the Académie royale d’architecture.

Biard was mainly active as a sculptor but also made architectural designs yet only very few of his works survive. He created some of the ornaments in the grotto of the celebrated Medici Fountain in the Jardin du Luxembourg in Paris, furthermore as tomb scultpures, portrait busts, and even large bronze figure of Amphitrite in the garden of Château Bagnolet. All of his religious works were destroyed during the French Revolution, a fate that also awaited an equestrian statue of Louis XIII on the Place de Vosges.

Early in his career Biard received a royal stipend of 500 livre which allowed him to travel to Italy in 1618. He is documented in Rome in 1619 where he also got married. Since his prints are mainly interpretations of compositions by Michelangelo, Raphael, and Giulio Romano, it can be assumed that they are based on models (in the form of drawings or prints) which Biard had collected during his Italian sojourn. 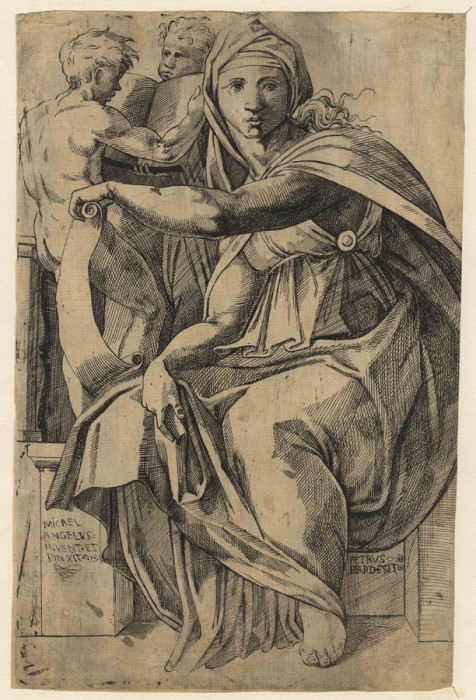 The Delphian Sybil (after MICHELANGELO)

After the figure designed for the ceiling of the Sixtine Chapel, 1508–12.
The French paper used for the printing of this sheet suggests that the etching was made after Biard’s return to France.