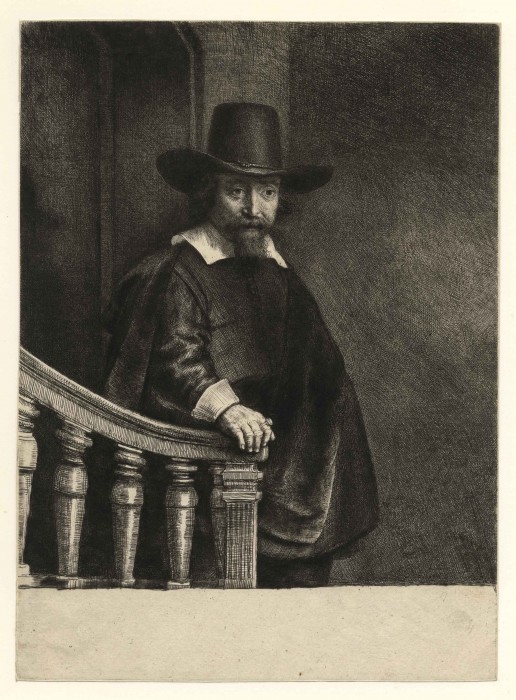 
Ephraïm Hezekiah Bueno (1599–1665), usually referred to by his Latinized name Bonus, was a physician and writer who came from a Sephardic-Jewish family. He was a renowned doctor and at the same time wrote poems in Spanish. He was also a supporter of the printing house of Samuel Menasseh ben Israel who was Rembrandt’s neighbor on Sint Antoniesbree-straat (today’s Jodenbreestraat) and for whose mystical book Rembrandt etched four illustrative plates in 1655 (Bartsch 36). It might have been Menasseh who introduced the sitter to the artist.

The imposing portrait print was executed in the same year as Rembrandt’s prints of Jan Asselyn (Bartsch 277) and Jan Six (Bartsch 285). All three have in common that they depict their sitters standing. Whereas Rembrandt often worked directly on the plate, he usually prepared his officially commissioned portrait prints carefully with drawn studies. For the portrait of Doctor Bonus he made an oil sketch on panel of identical size (Bredius 252; Rijksmuseum, Amsterdam). Cliff Ackley calls the print “a virtuoso essay in black on black.” He further writes that “it is one of Rembrandt’s several ‘hand-drawn mezzotints’ from the 1640s, made when the new copper plate process of mezzotint (that used a special tool to achieve continuous tones on a copper plate) was still in its primitive developmental stages. Rembrandt’s deeply textured, velvety symphony of blacks is composed of an unsystematic web of fine strokes of etching, drypoint, and engraving.” The portrait achieves to evoke the presence of the sitter through Rembrandt’s masterful rendering of Bueno’s eyes. “One is, in fact, tempted to characterize this print as the portrait of a pair of eyes—eyes that convey a remarkably vivid and complex sense of interior life” (Ackley in: Rembrandt’s Journey, exhibition catalogue, Boston/Chicago, 2003–04, p. 142).